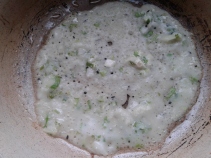 As far as food relationships go, idly and dosa are siblings – born from the same parents, urad dal meets (or mating with) rice (some furious fermenting between the sheets is required). While we always made idly from idly rawa (which in turn is finely grounded rice), dosa had a special parboiled rice as its component (making me now think that idly-dosa were actually step-siblings in my home..same father different mothers?!). Someone who has spent some time in the kitchen creating these batters would know the difference between the two. An idly batter is thicker, more grainy (if using idly rawa) compared to a dosa one, which is more finely ground and runny. But recently I read somewhere that both idly and dosa can be made from the same batter. Make idly from the fresh batter and use the leftover to make dosa the next day. I was surprised, though mom had always known this, and used the batters interchangeably to create new dishes with newer textures. And while dosa from the idly batter was tolerable (coz it had a rawa dosa feel to it), the other way round was a no go. It made for lumpy, sticky idlys, which would taste horrible when cold.

And while I preferred both piping hot, I still managed to eat the cold idly that made its way to my tiffin regularly in school. But I always turned up my nose at the cold, dry dosa, which wouldn’t go down well with the chutney that accompanied it in a smaller dabba. Which was when mom decided that dosas would be had for dinner or breakfast on weekends. So there followed Sundays, where mom would start making these on two tawas from 7:30 pm. These were doled out to my brother and me, accompanied by potato curry, coconut chutney and sambhar. I would have the last one with ghee, or butter – that was the indication to mom, that I had my fill. Next in turn would be dad. She would generally make hers last, many a times having a dosa in between as she made them for us. As I grew older, I started to make the last ones for her – giving her a much needed respite, and helping me practise the art. For there was no non-stick tawa then. Dosas would be made on iron griddles, and it was necessary to know the right temperature of the tawa (by sprinkling water) and seasoning it with sufficient oil, to make these crispy pancakes. There also followed many botched attempts, where the dosa would stick, making it difficult to peel and fold it away. What followed then was nothing short of a kushti (wrestling) with the griddle in one hand and the spatula in other, trying to scrape away the dosa (or what remained of it).

Dosa was the most ordered family item when we ventured out to eat. Despite the fact that we regularly ate dozens of home-made dosas, there was something about the oily, long, crispy ones which were a trademark of the Udupi hotels we frequented (we never did the paneer subji-kulcha-naan thing in the restaurants until much, much later). Perhaps it was the sweet sambhar that was a draw. There were times we would go out for a dosa-thon –  and eat all type and manner of dosa –  masala, sada, ghee sada, butter dosa, mysore masala, rawa dosa – the possibilities were endless, and oh so satisfying. And when we moved to Hyderabad, and discovered Chutneys, our love for all things dosa reached new heights, and steam and sponge dosa became a must-have. Interspersed were Sunday mornings of the Pragati dosa – where paneer butter masala met masala dosa, topped with cheese, served with potato gravy and chutney. Added in the fray were dosas’ close cousins, uttappam and pesarettu. The former was a thicker version of the dosa, topped with onions and tomatoes (mostly), while the latter was a non-fermented version made from yellow or whole moong dal. What also got added to our dosa repertoire at home were ragi dosas and adais, thanks to my music teachers, in whose homes I had eaten the two. You couldn’t get more delicious nutrition packed for your breakfast or dinner than these two. And now, I am only discovering neer dosa, poha dosa, quinoa dosa…the variations are mind-boggling to say the least.

So there you have it – regular dosas, ragi dosas, adais, uttapams, pesarettus, instant rawa dosas all get made regularly in our Taipei household. These, of course, have come from my (fermented?!) imagination. But the Scientist is quick to add that I am leaving out what he makes best – wheat dosas..yes only that he calls them dhirde, which are crispy pancakes laced with crushed garlic (his signature). So I will concede him that tiny point. Dosas (be it instant or otherwise) make life easy when I have late night Chinese, yoga or music class. And my job is only to prep and have the batter ready. Which of course requires some planning and forethought – soaking and grinding the dal and rice, and ensuring the container is kept someplace warm for the batter to ferment. These days my oven beautifully rises to the occasion (pun intended?). On chilly days, I warm it for a few minutes and dunk the batter in, and leave it be overnight. The task of making and serving the dosas goes to the Scientist, and he has, of late, become rather adept at it. I for one, am not complaining. Who wouldn’t love having dosas made and served, faster than you can eat them?

Which was how we conquered all the baaraatis when I got married. Baaraatiyon ka swagat humne paan parag nahi, idly-dosa se kiya (we welcomed our wedding guests with idly-dosa). The party was due to arrive from Nagpur around 9 a.m the day before the wedding. Since it was breakfast time, we decided to set up a dosa counter to welcome them. As it happens with any wedding party, by the time the train arrived, and all made their way to the venue, it was well after half past ten. Naturally, everyone was famished. The hot, crispy dosas were just what was needed. For those not accustomed to having it regularly, this was a rarity – and hence they did ample justice to the fare laid out for them, going for second and third rounds (and later skipping lunch). And declared that the wedding was hit even before the D-day!!