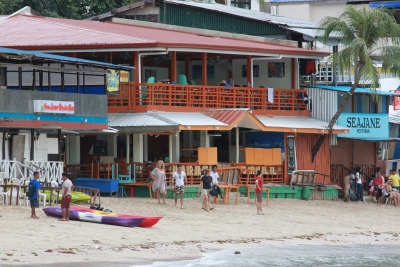 Venturing upto El Nido, the northern tip of Palawan, in our Philippines adventure, was almost an afterthought. While flight changes and accommodation did cost a bit more than expected, it was the best decision, travel-wise!

Our hostess, in Puerto Princesa, had kindly arranged for an airconditioned van to pick us up from our home-stay, which arrived promptly at 9:15 in the morning. We had had a leisurely breakfast of bread, jam and cheese, washed down with instant coffee. To our dismay, we were the last ones to be picked up, and thus had to make do with what space was available (which, to say the least wasn’t much). We were of course, used to such cramped travelling conditions back home in India, so neither of us thought to make any complaints. As with what happens when you accept the terrible, you settle down and make yourselves comfortable, in any manner you can. So we took off our shoes, put up our feet (literally) and decide to make the most of our 5 hour journey.

We made a quick stop for filling up petrol, and being seated right near the door meant I had to hop out whenever anyone else from the van had to get out (driver excluded). Now, I am Mumbai girl, and have travelled craning out of the local, for a long part of my adult life, so I knew exactly, what it meant to hop in and out of trains and vans alike, when they came to a stop. The whole petrol filling activity was pretty amusing, as the driver was trying to have a full tank, and together with the station attendant, proceeded to shake our van vigorously from time to time to accomplish this.

I had decided to finish off another novel, but I soon gave up the futile attempts of trying to focus on the screen. I decided to make the most of sitting at a window seat (another Mumbai habit), and simply watch the world go by. The Scientist had decided to travel off to slumberland. So with a child like wonder, I decided to put my nose to window and stare out. I was not disappointed. Somewhere along the way, the sea decided to accompany us on one side. The views were breath-taking to say the least. Jade-blue waters shimmered in the distance. The frothy milk like waves lapped the shores of uninhabited beaches, with pristine, powdery sands. On the other side of the road, the mountains rose, dotted with palm, banana and mango trees. The road itself was winding, like in the Western Ghats. The day was clear, and with the sun ascending, promised to be scorching. But we were ensconced within the A/c van, so we did not feel any of the heat.

Around noon, and after covering half the distance, our driver decided to stop for lunch.  This was supposedly the usual place. Sometime back, I had passed a sign, welcoming me to the cashew capital of Palawan. I ventured out to see if I could buy the said cashews. I bought some to munch on the way, promising to buy some for our Taipei friends on the way back. Of course, there wasn’t any vegetarian lunch available. There were bananas and mangoes instead. So instead of picking up the usual chips, that we would have otherwise picked up, we decided to go the fruity way. The bananas were the elaichi kelis, I had eaten in Mumbai, mostly during the rainy season. We neatly polished off a bunch, and proceeded to do justice to the mangoes. The mangoes were cut and served with a spoon, to scoop out the flesh. Just the first bite, and I was in mango heaven. Ripe, luscious and bursting with sweetness, it brought back all the happy Alphonso mango memories. I made short work of the cut fruit, and then proceeded to eat the koy (or central part). I had noticed that other mango eaters had discarded the pitts, and to me that seemed a criminal waste (much on the lines of seeing young coconuts thrown away with the malai inside!!). Of course, I did get some stares from the non-locals, but I was too taken in with the mango, to care. I am sure if there are mango gods (there must be!), they would have looked down on me, with love, and showered blessings for revering the king of fruits.

With happy meal tucked in, we proceeded on our journey northwards. The sea now had moved on to the left side, so I could only catch glimpses from the other window. What I saw from my side was the usual village life – so typical to India too..students walking their way to schools, a lone bicyclist, verdant rice fields, green with young rice shoots, farmers using  bulls to plough the fields, a few cows in the fields, napping and chewing the cud, and buffaloes in the shallow ponds, with white herons perched on the back, and plenty of palms nodding in the far distance.

In no time, we had arrived at El Nido. The driver had made it in less than 5 hours, and proceeded to drop us off at the said bus stop. The bus-stop, if you could call it that, was a dusty affair, lined with a few air con vans, like the one we travelled in. We were asked to take tricycle, (pic here), to go to our hostel.

We found that our hostel was actually right behind the bus stop, on the other side, but the road was far too steep, to make it one piece with our bags and baggage. Amidst all the hullabaloo, I forgot a brand new water bottle, in the van, and only realised it, only on reaching the hostel. After being shown our rooms, we decided a path tekne (resting your back) was in order. After sitting in cramped and contorted position for the whole of our journey, what luxury it was to sprawl out on firm beds!

We had realised, that we packed far more food, than was perhaps necessary. So we promised ourselves, we would finish off all the packets of ready made, and ready to eat foods, and travel back lighter. So out came the mathris and samosas, and some coffee from the reception. (The reception offered unlimited tea and coffee at any time of the day or night, with huge thermoses filled with hot water, and tea bags and instant coffee sachets, sugar, cups and stirring spoons lined up at the very entrance). As we made our way out to explore El Nido, we bumped into the owner of the hostel. He proceeded to ask us where we were from, give us directions to the beach. Turned out he used to be a sailor, and had visited India from time to time, so the instant connection was formed. We also asked him, if we could get our ready to eat packets heated, or prepared with boiling water, and he replied that his kitchen was always open, and all we had to do was ask the chef.

The beach was a mere 5 mins away from the hostel, and by Juhu chowpatty standards, pretty deserted. There were a few foreigners strolling and sunbathing, or enjoying drinks on the numerous patios that lined the sea front. I was immediately drawn to the water, while the Scientist decide to make himself comfortable on the sands by spreading out an old towel, and soon proceeded to nap (his actual reason was someone was needed to keep an eye on the belongings!). So I enjoyed the sea after ages, and after catching the sunset, we proceeded to go back to the hostel, enjoy our ready-to-eat bisi-bele-bhat and make plans for the Island Hopping Tours for the next day.