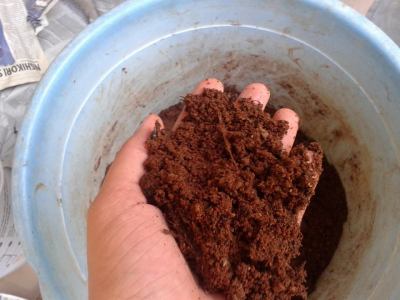 Remember the poem “Bits of paper”, and how all you had to do was pick up the bits of paper and put them in the dust bin to make the place clean and tidy. Times have changed since we were children. And today’s times call for more conscious citizenry to bring about the change in the world.

We talk about how they should ban the plastic. How they should get their cars checked for pollution. How they should have stricter norms for green house emissions. Everyone you talk to, has an opinion of how they should change the world. But no one ever talks about the we in the they. Unless we change, they are going to be the same. Why do we need the they to ban the plastic bags, why can’t we carry cloth bags with us when go shopping? Isn’t it as much about us, than about them? We cannot take the major decisions. But surely we can take small baby steps, starting with us, our families, our communities and then the nation.

I remember randomly clicking on the facebook ad for SmartBin composting solution. What I saw there, had me enthralled. Surely composting was not this easy. It meant hard work, digging trenches in your plots, and waiting for months before nature had it’s way and gave you rich, nutrient dense compost. Plus you needed to have a piece of land, or the stench at home would have been unimaginable. I couldn’t have been more wrong.

Green Tech Life has come up with a really smart composting solution. It starts with getting your own composting bins by an easy online order (and shipping’s free all over India, so yay!). It comes with an user manual, and a Facebook community with folks who have been ardent fans and users, many videos to show you the how-tos, and everyone out there wanting to help you go greener. Well, figuratively I mean.

My own bins arrived in record time. It was two years back, so I was using the initial SmartBins (there has since been an upgrade). I eagerly read the manual and set up my SmartBin. And then I made a declaration – “No rubbish from the kitchen will find it’s way to the regular dustbin. It will have to go through me”. My parents (who by now had accepted that their daughter had hit a new level of crazy) decided to humor me. Soon enough, all peels, skins, stalks would be waiting for me in the kitchen at the end of the day. I would then dutifully put them into my bin, press it down with a plate (to remove all air, and compact it), sprinkle bio-bloom and go to bed, having done my good deed for the day 🙂

It wasn’t always that easy I must admit. I mean, sometimes dad would flip a banana skin innocently in the dustbin. And I would trawl through the bin, pulling out the said skin triumphantly (only after giving him a talking to, on how we are going green, and smart binning all the kitchen waste). Slowly they grew accustomed, and sometimes would earnestly ask if something can be a part of my composting, or they could throw it off. For you see, hard woody stalks or threads from flower garlands cannot go into these bins. But all raw kitchen waste, even cooked leftover food, which has gone bad, can be composted (after removing the liquids). Soon our watchman (who came to collect our garbage everyday) started noticing and asking “aaj kal aapka kachra itna kam kyun hain?” (Why is your garbage so less these days?). I couldn’t help but smile.

One week into this adventure, I was waiting to harvest my first SmartBrew. This is the liquid which is collected at the bottom of the bin, and has to be drained off periodically. It serves as an excellent fertilizer, and many users would smartly post their harvest, with before and after pics in the community. But disappointment was waiting for me here. I tried harvesting and out came a few drops – I had seen others with half filled bottles, so you can imagine how crushed I felt. I decided to wait a few more days and try again. Again a small trickle. When dad saw my repeated attempts, the engineer in him told me to hoist the bin to height and tilt it fully the next time I tried. And lo and behold! After a fortnight of religiously dumping all waste, with the said bio bloom and compressing, I harvested my first SmartBrew. The golden liquid filled up half my bottle, and I was thrilled to bits! As advised I appropriately diluted it, and fed it to my tulsi plants that evening. I am not exaggerating what a life saver it was for them! A miracle liquid, it soon turned around the yellow leaves, bringing forth new tiny greens, and in a few applications, our tulsi was transformed. We had a very verdant green bride that year for the Tulsi Vivaah at the end of Diwali.

That then was just the beginning. I had excess smart brew, and I started sneaking it into our neighbours’s plants (rather than throwing it down the toilet drain. Oh by the way, did I tell you, the SmartBrew is a green toilet drain cleaner? Well yes, but it’s better off as a fertilizer to anything green).

Once the first bin was filled up, I started on the second one. The first one was left undisturbed for “pickling” for two weeks. Then came the layering stage, where I had to layer compost and pickle, one over the other and pack it off for the final composting. I chose to use the big drums used for storing water. And I had no idea, that one smart bin produced so much pickle to fill up the whole drum. In went the pickle, and compost, layer by layer, and I sealed it off with an old cloth and newspapers to prevent flies from going in and laying eggs. And then I had to simply wait. In four weeks, I was looking at black gold – yummy home made nutrition my plants were going to love!

One thing the Green Tech Life community taught me was gardening. I mean I would buy a few plants at the nursery, and water them religiously, and apply fertilizers once in a while, and all that, but I wouldn’t have called it a hobby or myself a gardener. Then I saw for myself, what people had done to the small balconies and limited spaces they owned, and I was enchanted. And so very jealous. Come on, nothing beats eating tomatoes from your own garden! Or having fresh coriander for garnish at hand. Taking cues, I started with simple spinach and tomatoes and chillies. I bought flat trays for the leafy greens, and medium sized pots for tomatoes and chillies. I learned about which plants can be transferred after a few weeks, and which ones need to be planted in the right pots at the beginning.

Since our balcony wasn’t getting enough sunlight, I started lugging the plants to and from the terrace every day. And then found the spot on the space between two floors, where I decided to permanently place them, till the sun and right season returned. With regular Smart Brew and home made compost, my enthusiasm and adventure knew no bounds. I started off potatoes, cauliflower, cabbage, brinjals, radishes. The spinach, methi, coriander,and chuka (chokkakura in Telugu) were regular staples. Usually if planted with the right time gaps, they gave us enough green leafy veggies every alternate day throughout that winter season. Soon enough my tomatoes and chillies flowered. I plucked off the first a few blossoms, but they were in a crazy growing frenzy. And I let them be.

My efforts were paying off. My small garden became a place of pride, and my parents would show it off to all our guests and visitors. My niece would come and spend many an hour happily watering the plants. And the temptation to pluck the small tomatoes was so irresistable!

I had allowed some plants to purposely go to seed, just to see the whole life cycle. And thus I also had some coriander seeds, some methi flowers and beans (which contain the seeds) and hold your breath! some wheat!! It was a thrilling science experiment.

Of course, like all good things, this came to an end when I had to relocate to Hong Kong for a project. My parents couldn’t keep up with the daily care all the plants demanded, and so they had to go. The composting also took a back seat, and I gave away my SmartBins to my cousin to keep the torch going.