Isn’t that a puzzling title, to begin with? I mean whatever could these two foods have in common? Granted they are both sweet, but that’s where the similarities end. Right? Wrong. The more I ruminate (of course, figuratively!), the more I can attest that they are related. Like distant cousins. Well, sort of.

How? You may ask. But, first some tales of my encounters with the duo.

I ate the first real doughnut in London. Krisy Kreme, to be precise. Whatever passed off as a doughnut before that, was, well, not the real stuff. But jalebis, were another matter altogether. You would bump into these at most Indian, nay at least Maharashtrian weddings, thread ceremonies, receptions… At the time, not much thought went into making these. You just bought and ate them, or spotted them at the said functions, and gobbled them up. When I did ask mom about making jalebis, she told me it was a rather long drawn process, and that grandmother made excellent jalebis, but us lesser mortals shouldn’t even try (I think it was more due to the fact that knowing our voracious appetites, she best decided it shouldn’t be attempted at home) That was then.

So you can imagine my surprise, when mom made these at home on one of my recent birthdays! Crisp fried in real ghee, they were simply mouthwatering. We couldn’t get enough of those, though my brother was missing in action. (In my home, all sweets are made in shudhh.desi.ghee. Period. No questions asked, and no deviations). I had since then grown-up, and had mastered some cooking basics. Intrigued, I asked mom for the recipe. Fermenting all purpose flour with besan overnight, adding a pinch of turmeric, and deep frying in ghee, and plonking them into a sugar syrup, laced with saffron and cardamom, mom made it sound so easy. I decided to give it a try. Surfing the net, I came up with exact proportions of flour to besan (1 cup to 2 tbsp), and embarked the experiment for our new years’ celebration, this year.

As an side-note, my MIL has informed me that the sweets made on new years’ (Gudi Padwa) should have sugar syrup (“paak” in Marathi). The explanation being, just like the paak, whose strings do not break, so should be the case with our relationships throughout the year. And thus we begin the year in this sweet manner. Typically she would make paakatli puri (all purpose dough, flattened out, deep fried and coated with sugar syrup) for this day. I decided to be more ambitious, but in keeping with her tradition. Why not make jalebi??

I had to keep this a super secret from The Scientist, who had an aversion to deep frying anything in “his” kitchen. I also had to gather some arsenal – a flatter frying pan (so it would use less ghee), a tomato ketchup squeeze bottle and of course ghee. The first was already available at home, a quick trip to the morning market solved the second problem. For ghee, it was a bit more convoluted. I had to go n buy unsalted butter, and make ghee (We were tired of eating Amul Ghee here, so were in a phase of making ghee at home).

All set, I checked on my mixed up batter. It seemed fermented with some bubbles in it. Next step of course was making the sugar syrup. You need to make an “ektaari paak” (one string consistency sugar syrup, ie if you stick a blob of syrup on your thumb and first finger, you should get one string). Now I love my Indian spices, so in went some saffron and cardamom powder in the paak. And then, the homemade ghee made its way into the pan. I waited until it was just the right temperature, and added a test drop of batter. It quickly rose on the surface. The temperature was just right for frying. I made a first batch, trying to make concentric circles, but of course they were a little uneven. Flipping the jalebis, I fried the other side. Gently rescuing them from the pipping hot ghee, I waited for a few seconds before adding them to the sugar syrup.

The first batch was a little limp as it came out of the syrup. I realised I need to fry them a bit longer, it’s okay to get a little brown colored jalebis, than limpy ones. I also realised with dismay, that frying used up copious amounts of ghee, and by the end of the process, I had none left!!

All said and done, the experiment was a huge success. I had made some rabri (thickened milk sweet) to go with this, and the dessert was over, even before we sat down to the meal.

Around this time, I had started baking breads at home, and would devour whatever recipes I could lay my hands on. The doughnut recipe really intrigued me. You make a yeast dough, like you do for bread, but instead of baking after the second rise, you deep fry them (traditionally in animal fat!). To this then, is added a glaze, made from sugar and milk or butter.

It is only after making jalebis a second time round, did I ponder on the similarities and differences between the two recipes. Ferment dough, fry, sugar-ify. Of course there are subtle differences – the batter for the former is a runny, dosa or pancake like batter, while doughnuts have a firmer dough. Being an Indian dessert, jalebis usually have cardamom and saffron subtly flavouring it, whereas doughnuts have to make do with cinnamon, or nutmeg. Of course, the sugar syrup is definitely not laced with chocolate or sprinkles, but doughnuts boast of this additional color and sparkle. What is also interesting is to take the over-sweetness out of it, jalebis are served with rabri or mattha (sour, spiced yogurt), while doughnuts go well with black coffee.

I haven’t made any doughnuts at home yet. However a recent visit to Mister Donut, here in Taipei, was a bit of a disappointment. They didn’t live up to my expectations. Of course I  compared them to the home-made jalebis, and they didn’t hold a match. I will go desi, any time, on this one (Or at least till a sugar craving hits, and there is no jalebi found at home. Then I might go crawling back to a Krispy Kreme or Mister Donut)

PS: One outcome of making the jalebis at home, is The Scientist’s excitement at making them (“I didn’t realise it’s so easy”. Well, thank you). He decided to make them for our recent Diwali get-together (scrapping my moong dal kheer), and also as a surprise birthday gift for a restaurateur friend. Yes it was a hit, and now I don’t need to fry them myself. I have a willing volunteer.

PPS: Jalebi, has over the years been popularised in folk songs and the more recent raunchy number, Jalebi bai. My favourite one though remains, the bhondla song.. 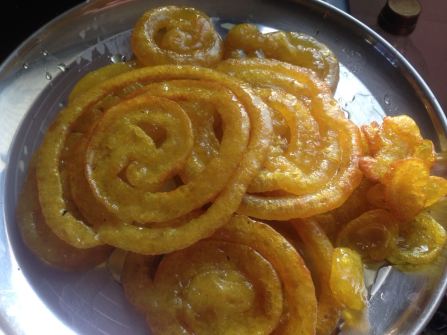 2 thoughts on “Of jalebis and doughnuts…”