Now before you start wondering if I have bought a horse or a cart, let me right away de-bunk the notion.

For my love of cycling, re-discovered after living in London and Taipei, and more to put a full-stop to my “borrowing” (ok, whisking away without so much as a ‘please?’) my husband (The Scientist)’s bike, leaving him high and dry on most days, we decided it was high time for me to own one. I had religiously started checking out ads for a second-hand bike, and one fine day, we got lucky!

With no time lost, and some negotiation, we decided to go and have a look – agreeing to buying it on the spot, if all was good. In eager anticipation, we set out to the meeting place. Our seller was already there. To be honest, I was sorely disappointed and it was no love at first sight. It looked a little dusty, the seat cover had seen better times. But The Scientist inspected it and took a test ride (outside a bustling MRT station in the evening – but no one batted an eyelid), and declared it was good. The asking price was NT$1500, but we managed to bring it down to NT$1200. Deal struck, money exchanged hands, and I was a (bit miffed) owner of my first bicycle.

First you say? Well, yes. You see, as a kid when I first started learning to ride a bicycle, we would rent a bike for Rs.5/hour from a bicycle repair shop. I must have been 6 or 7 yrs then. I remember the Saturday and Sunday evenings spent with dad holding the bike and running in tandem, and me taking the first wobbly steps in our small compound. I thought I had it figured out in a few weeks, and that’s when dad started to let go. I didn’t realise it at first, for he would keep running along side. But I looked back once (a la Milkha Singh) and realised with terror that I am on my own. The bike started wavering, and soon we both landed in a heap. Those were times, as a kid, when fear didn’t keep us down for long. Dusting scraped knees and sore bum, I climbed back on, entreating dad not to let go. He made perfunctory promises, but knew too well to keep them. A few more bruises, narrowly dodging oncomers and unceremonious landings later, I started to ride well, and in fact grew to love it.

And then a few years down the line, my brother started pestering my parents for a bike. They gave in. I still remember them coming home with a bike, and I was furious! Well not because they got a bike for my brother, but because I was not allowed to go and choose and have a say (I was a typical Aries child back then too). It took some cajoling on my parents’ part, and extracting a promise that I will, as the elder sister, have the right to ride it as I please, and on demand. Gosh, I still remember cycling away in summer vacations – morning and night (sometimes with bro as a double-seat).

That brings up a few other cycle memories. I had a friend (let’s call him R) back then, when I was 6-7 years old. He used to live in the same building and we went to the same school. And I was a super favourite of everyone in his family – mom, dad, grandparents, uncle (I was, and am charming, you see..thank you!) Now R’s uncle had bought him a bike, and I so wanted to ride it. R was really a sweet kid, who didn’t mind sharing, but one day he decided he wanted to ride it alone. I went up and complained to his uncle, and uncle promptly made him give it up, leaving him in tears ! (Was I a bully? Ahem, I was only speaking up as a woman – girl power and all that!!)

The cycle and I, parted ways after school, and I only rode my next cycle in London. London is a bike-friendly city, and on my first visit, I wanted to tick off all the boxes. There used to be cycles for hire – Barclays Cyle Hire – a pound an hour. I have explored Hyde Park on a cycle, and the memories still make me nostalgic.

After arriving in Taipei and being left alone to explore the city on my own, I made umpteen excursions courtesy U-bike. This public bike system is synonymous with bright yellow orange bikes, which have a basket in the front. You can rent it at any one of the numerous U-bike stands, and drop it off at another. Now I am particularly partial to these bikes with a basket, as you can put all your stuff in the basket and enjoy the pleasure of biking. I have made umpteen trips to the vegetable markets on one of these.

Taipei has a lot of bike trails, and my favourite is the riverside park – along the Keelung river. The Scientist brought me to this trail on my last day of first trip, and I so.fell.in.love!! (With the place, not him – that happened much earlier). On one of my next trip, I decided to explore this biking trail on my own. I borrowed a U-bike, asked some directions from him, and set off. Finding the entrance was a little tricky, as it was hidden away in some by-lanes I didn’t remember. Nevertheless, I managed to find it, and spend a happy couple of hours on one bank of the river. That’s when curiosity struck me. Why go back the same way? Let’s explore the other side as well. Again my Aries self acted. With great difficulty I hoisted the cycle onto one of the bridges, and managed to reach the other side. And went on driving. For a long time. Slowly I started realising the landscape on the other bank is very different. And the trail is not necessarily parallel to the river bank. It was getting darker, and I took a wrong turn to realise I am on some bridge in what looked like an industrial area. I cycled back the way I came, till I could see the other bank in sight. I was by now beginning to tire out. But I bravely ventured on, hoping to see a connecting bridge and going home the way I had came. None was in sight. I had managed to go as far the starting point (but on the other side), but realised that there was no hope. I had to cycle back to the bridge I had crossed on – if there was any chance of going home. I had tried asking directions by pointing to the map on the phone, only to be greeted with shakes and nods. And thus started my weary journey back. All the thrill of exploring gone, I forced myself to cycle back, one pedal at a time. Luckily mid way I found another bridge connecting the two banks, and one kind Samaritan, who understood English, helped me carry the bike over to the other side. In fact, he didn’t stop there, but came a long distance to show me the way, ensured I knew my way, and then bid me good-bye. (I got some flack from husband later for troubling the poor guy – for the Taiwanese are very helpful, and they will many times go out of the way to help you out).

Cut to the present. Cycle bought, we drove back home from the far off National Taiwan University that summer evening (well in all honesty, The Scientist did the driving – I chose to drive back on the public U-bike, hey I was miffed and all that!). We traversed through the University, stopping at an Indian restaurant (the owner offering us the best chai, on the house), huffing and puffing the last few kms.

From that day on, my bike has parked herself just outside our building, and on some rainy days at the cycle stand outside my workplace. She has managed to transport me to and from office on non-rainy days – ensuring I am not late to work (though I live a mere 15 min away). She has, though, caused quite a few embarrassing moments – having unseated me on one occasion for instance. Or leaving a big wet patch on my pants after some rainy nights. Let’s say I just keep some spare clothes in office. These days, however, it’s a new tactic. She makes these rusty, creaky, squeaking noises every time I ride her, announcing my presence – causing people to turn around and stare (I have absolutely not put on any weight, in case you were wondering).

I am growing fond of her, have come to depend on her, but that’s about it. It will need a lot of give-and-take to make this relationship work. But we are slowly getting there. In case you are wondering, here is Rusty (or Creaky or Squeaky – whatever! (eye-rolling)) 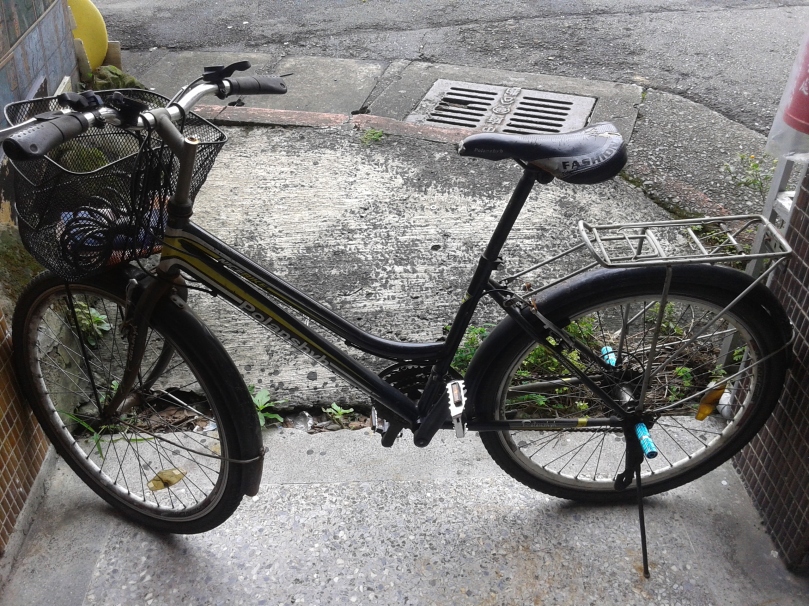 PS: I have come up with a smart solution to avoid changing clothes at work. See below.

4 thoughts on “My basanti…”